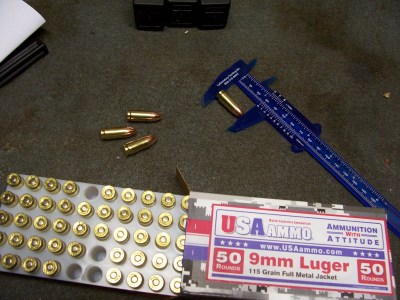 About a month ago, the cool discount site GearHog had a deal to buy $100 worth of USA Ammo product for $50. Given my previous good success with USA Ammo, I jumped on the deal.

Well, so did about 1,999 other people, so much so that, even though I placed my order for 500 rounds of 9mm as soon as my coupon was valid, it took over 2 weeks for it to ship. During that time I called USA Ammo to check up on my order, and talked with Terri there. She confirmed that they were indeed extremely busy, thanks to the coupon deal. I suppose it’s a good problem to have.

One of the things that concerned me, being an engineer by training, was the possibility of quality control issues at the USA Ammo factory because of the increased pressure to make orders to meet the demand. So, I naturally wanted to be sure the ammo I would receive was consistent and of good quality

When my ammo arrived, I immediately found one difference from my previous order. Before, the ammo came in 50 round bulk boxes, but this shipment was packaged in 50 round trays inside boxes, just like other brands of ammo. I don’t know if this was a conscious change on their part in response to customer feedback, but in my mind this would be better for the ammo, since it prevents damage from rounds impacting each other.

Otherwise, the ammo was the same as my previous order. I still had a few rounds left, and the new order was a shiny and clean as the older rounds.

As a quick QC check, I selected the first box in my shipment and the last box, and selected 5 rounds at random from each box. I then used a caliper to measure overall length, and I found that all the rounds I tested were the same, within my measurement capability. None of the rounds caused me to have to move my caliper.

Not being a reloader, I don’t have any scales to be able to weigh the cartridges. Sorry. Maybe I should get a scale.

As a final test, I shot about 150 rounds of the new ammo this past weekend, and, despite my dismal performance, the ammo performed flawlessly. I didn’t do any accuracy testing on this batch, but neither did I notice any flier rounds that weren’t attributable to a really crappy shooter on the pistol.

So, in review, despite being slammed with demand following their popular campaign on GearHog, the quality of product delivered by USA Ammo did not deteriorate as far as I could tell. I am pleased by this, because it tells me that this company is serious about what they are doing.

And it pleases me because I still have another coupon, and I’m ordering another 500 rounds today.

FTC Disclaimer: If you click through to GearHog from the link above, or from the link in the right column, and you buy something, I get a commission. This deal is available to anyone who wants to sign up for it at GearHog. I did not receive any additional consideration from GearHog.

I bought all the USA Ammo used in this post, and performed all the testing myself. There has been no influence or contact in any way from USA Ammo.