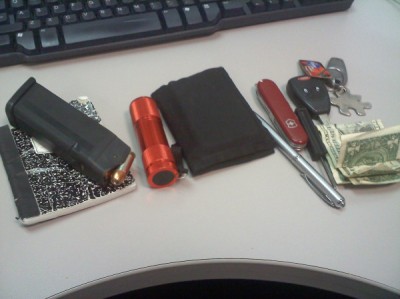 This week on Tom Gresham’s GunTalk Radio, Tom presented a retrospective of the September 11 attacks. The focus of the show was people who survived the ordeal because of how they were prepared for emergencies.

To me, the most compelling story was from John Tucci, an undercover NYPD officer who was buried with others in the debris of the fallen towers. He told how they were being suffocated by a large plate glass partition, until a fellow officer managed to get his Glock 19 free and shoot the glass. John was then able to find his way to safety, in the dark, because he carried a flashlight.

This got me thinking about what I carry every day. I know that, compared to some, I’m probably a lightweight. Massad Ayoob, for instance, carries multiple of just about everything, including cell phones.

As you can see from the picture above, here’s what I carry, from right to left:

In my right front pocket:
– My car key on a ring with the door fob for my office and a shopper card from a local grocery store. The shopper card is for identification if my keys are lost. And, this is where I shop the most, so I carry the card.
– Cash in a money clip. I never carry cash in my wallet.
– A pen. I’m an engineer. I used to carry pens in my shirt pocket. With a pocket protector. Really.
– A knife. Most of the time it’s a 20 year old Swiss Army Tinker model. Sometimes it’s a folding knife I can open with one hand. I don’t clip it to my pocket, unless I’m camping. No need to telegraph anything.
– A Glock armorer tool. I took to carrying this a year or so ago when I was doing a lot of armorer work for friends. It’s probably my least used piece I carry, but it’s light.

In my left front pocket:
– My wallet. It’s a nylon police wallet, with a full view ID window. I carry my drivers license, my Georgia Weapons License, insurance cards, my debit card, one credit card, a few membership cards, my lawyer’s card, and some business cards.
– An LED flashlight. This isn’t an expensive tacticool Surefire, just an aluminum AA flashlight. I keep the batteries fresh, and I use it all the time.

In my left rear pocket:
– A notepad. Again, I’m an engineer, and I take notes all the time.
– A spare magazine for whatever gun I’m carrying. I practice mag changes with it there.

Not shown – a cell phone, that I either carry in my left front pocket or in my front right watch pocket, and a pistol.

Not much, but it works for me. The one thing I may add is a whistle.

Now, what I don’t carry:

I don’t carry a hundred keys on a caribiner clipped to a belt loop. I don’t use many keys enough to warrant the bulk. I keep a key ring in my car with my other keys, and there’s a home key in my get home bag, in case I get home and the power is out so I can’t use the garage door opener, or if I want to go in through the front door. A spare key to my back door is kept in a secure place on my property.

I don’t carry my cell phone in a holster on my belt. My pocket is fine.

I also don’t keep a hundred shopper cards on my key ring. They’re on a spare ring in may car, if I need them I take them in, then put them back.

I don’t keep money in my wallet. I went to college in downtown Atlanta, and I worked it out then that if I were mugged, I could throw the money to the right and run to the left. Then I’m not giving up my ID or credit cards.

I don’t carry all my life’s work in my wallet. I have a separate portfolio I carry in my briefcase, where I carry membership cards and coupons and all the other stuff, and if I need something, I get it.

I don’t carry an expensive flashlight. The one I carry is sold 2 for $4 at the local tool store. It’s bright enough to light up the living room, or the back yard. I have a dozen of them around the house. My kids carry one in their school backpacks, and I have one on top of both gun safes. The flashlight is probably the most useful thing I carry, and a week doesn’t go by that I don’t help someone connect a computer under their desk or check a furnace filter.

I don’t carry a fighting knife, because I’ve never trained to fight with one. I carry a pocket knife, because I used the screwdrivers and tweezers a lot. If I need a bigger knife, I carry two.

I did a quick poll of the people in my office, and I found that a lot of guys carried pocket knives, but few had flashlights. Two had flashlights in their briefcases, but if they didn’t have the case when the power went out, where were they?

A lot of people also moonlight as janitors or jailers, judging from their key rings.

Give some thought to what you’re carrying. Will it help you survive in an emergency?

One thought on “Be Prepared, Part 8 – Every Day Carry”

Facts are stubborn things; and whatever may be our wishes, our inclinations, or the dictates of our passions, they cannot alter the state of facts and evidence.