At the suggestion of a Twitter follower, @EnBloc, I set out to perform a scientific test of CCI 9mm shotshells, for protection against snakes and other small varmints in the woods. I planned to measure shot patterns at normal snake distances, and, as a final test, to shoot a tube sock filled with sand to show its real power.

That is, until a three foot long Canebrake Rattlesnake surprised us the other day at the range.

So, I decided to use another scientifically rigorous method. I shot that snake in the face.

As you can see, the shotshell was quite effective. In my opinion, one shot would have sufficed, but a follow-up shot was administered, just to be sure.

The 9mm CCI Shotshell contains number 12 shot, and claims to shoot at 1450 feet per second. However, at only 298 foot-pounds, the recoil from the round was not enough to cycle my Glock 17, so I had to cycle the slide myself. This is important to know in case the first shot is not as effective as this one was.

I had always wondered if these loads were effective. Now I know. 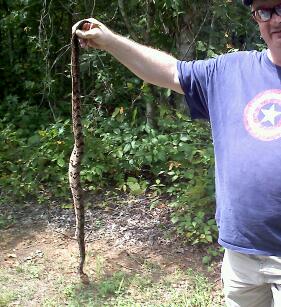