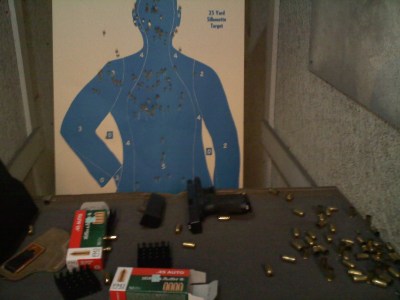 Unfortunately, many of us don’t have access to an outdoor range often enough to practice these perishable skills. In some previous posts, I gave some thoughts about how I practice at an indoor range to get ready for competition. Yesterday during lunch I went to the range to practice my self defense shooting.

Here’s what I practice for self defense. Since my range doesn’t allow me to draw and shoot, all shots are from low ready.

I use a silhouette target set at 7 yards to 10 yards. I use 10 yards because I’ve paced off my house, and this is the longest shot I would have to make. Sure, I might face longer shots, but that’s not what I’m practicing today.

I start with the target at 7 yards, and make single shots into the central target zone. For me, this is a triangle formed by the nipples and the larynx. A shot in this area makes the most effective hole in an attacker, and is most likely to stop the fight the fastest. I want 10 or so good shots in this zone, with good form and follow through.

Next I do two shots to the triangle, starting with a measured pair, and moving to a double tap. Again, I want good hits, good form, a follow through.

Next, I do Mozambiques – a shorthand for a drill invented by Lt. Colonel Jeff Cooper, consisting of two shots to the triangle which fail to stop the threat, followed by a shot to the head. It should be noted, from my experience at competitions where it has been included, that a true Mozambique is not a quick “two shots to the body and one to the head.” There is a pause between the first two shots and the head shot to assess whether the head shot is needed. This is important, because in a real fight, there is no way to know that the third shot would be needed. So, that’s the way you should practice it.

In fact, if you have a shooting partner at the range, a great way to do a true Mozambique is for the partner to watch you shoot the first two shots, then call “Yes” or “No” indicating whether your shots stopped the target. If not, then you follow up with a head shot. Then, go on farther – if that shot isn’t dead on the central nervous system, follow up with a pelvic shot.

Next, I turn my body 90 degrees left, and starting with the gun at low ready, I press out to the target with my right hand and deliver shots to the triangle, first singles, then doubles. This simulates a shot to the extreme right, where you might not have a chance to square yourself to the target.

Next is a couple of Mozambiques from this position, but I try to square myself to the target between the body shots and the follow up, just like I would want to do in a real situation.

Next, do the same from the other side. Naturally, using the weak hand means taking more care, but that’s the point of practice. You will get better.

If your range allows, shots from the retention position would also be included. My range has a bench in front of me, so this isn’t a good idea.

Next, I run the target out to 10 yards and practice making single shots and doubles, either to the triangle, or to another zone like the pelvis, so I can distinguish those shots from others. The longer distance doesn’t seem like much, but it’s enough for me to make a difference.

I usually end the session with the target at 5 yards, and I shoot 4 or 5 shots as fast as I can, while keeping them in the triangle.

As you can see from the photo, I’m not always as accurate as I want to be, but most of the shots are in the triangle or in the head, or at least where I was aiming. But I am getting better, and that’s the whole point.

One thought on “Range Visits for Self Defense Practice”