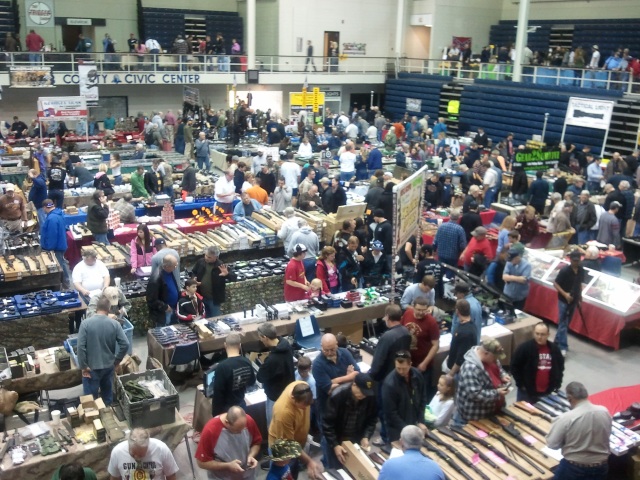 More than once have I read, from non shooters and anti-gunners, derision at the fact that gun shows are sticklers about not allowing loaded guns. They see that as obvious proof that gun owners are all negligent morons who cannot be trusted with their own safety, much less the safety of others.

Then comes a story like the one from last weekend, where a vendor at a gun show in Orangeville, Pennsylvania, accidentally shot a woman while demonstrating a concealed carry wallet holster.

In the same weekend, another person was killed at a gun show in Texas.

It’s obvious things are out of hand.

Fortunately, no. Here is the truth:

Probably no one is safer with loaded guns that the folks who attend gun shows, be they vendors, salespeople, or shoppers. Most have spent their lives around guns, and will go the rest of their lives with no incident.

But, the key to gun safety is awareness.

Every gun show I have been to has had police at the door, reminding us to unload our guns before entering. So, it stands to reason (and a casual reading of the news reports confirms) that it is when you combine a lot of vendors, each excited to show their products, with a lot of excited shoppers, and the aisles are full and bustling, that the awareness shifts. Vendors, anxious to demonstrate the latest, overlook Rule 1. They are paying attention, just not to gun safety.

And accidents happen. And will happen.

Are accidents at gun shows a real epidemic in America? I think not.

A Google search will show that there aren’t a lot of accidents reported. One study even concludes that guns shows present no significant danger, either in accidents at the shows, or from the guns sold there.

On the other hand, there were 120 deaths among fast food workers in America in 2012.

Now, I know that comparing the two isn’t valid, and it’s probably something we would yell at the anti-gun crowd for. But my point is this – if we have that many deaths, and many more injuries, in a workplace where everyone should be paying attention to safety, don’t become inflamed when an isolated accident happens in a venue where people sometimes slip up and pay attention to other things.

So, the next time you’re at a gun show (especially if you are a vendor), pay attention to the Rules of Gun Safety. Always.