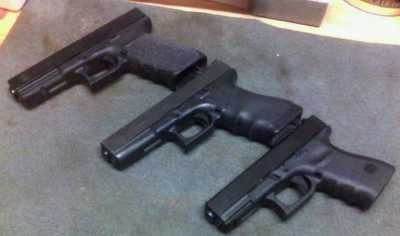 I am the proud owner of three Glocks. That’s Bruce in the middle, flanked by The Duke and Liberty. I’ve built this modest collection all on other people’s money.

Bruce was bought with the proceeds of some stock options that I had to exercise after changing jobs in 1992. I was fine with just one Glock for a while, but after a few years I wanted to add a second gun. My company had a sales contest one fall, and I managed to win enough Visa gift cards to buy a G21SF using my GSSF discount. This one I named The Duke.

Then, 2 years ago, I won a Glock in a random drawing at a GSSF match. A Glock 19 named Liberty joined the gang.

It doesn’t stop with Glocks. I’ve also used a company safety bonus to buy a very nice used Mossberg 500, bank bonus money to buy an SKS, and another sales contest to buy a Ruger 10/22.

The best deal – a coworker called me one Saturday from a gun show. He had found an excellent deal on a couple of Mosin Nagants, which he described as in excellent mechanical shape but needing substantial cleaning. His offer: if I would clean one of them for him, I could have the other one for myself. I agreed. Welcome, Vassily!

Now, if I could just figure out a way to get other people to pay for ammo!

3 thoughts on “Other People’s Money”