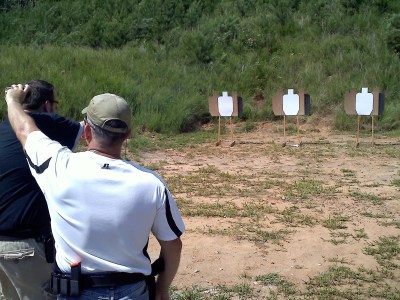 This past weekend I returned to River Bend Gun Club in Dawsonville, Georgia, and shot in their monthly USPSA match. I had shot there before, and once again the match was well run and very enjoyable.

The match consisted of 7 stages, with 3 field courses and 4 more stationary stages. As usual, the shorter stages gave me some fits, since they usually involve things like off hand shooting.

I’ve also had some time to think about the match, and here are my take-aways.

Note: I’m going to use a lot of USPSA terminology, some of which I am not going to take the time to explain. Feel free to do an interwebz search for what you don’t understand, and if you still don’t have an answer, leave me a comment or send me an email and I will try my best to explain.

How Division affects my stage strategy

I normally shoot in the Production Division. All Production shooters are scored as minor, and must limit magazine capacity to ten rounds. You are also allowed to start with one round in the chamber.

This means that a lot of what I worry about when I devise my strategy of how I am going to shoot a stage revolves around magazine changes. Rather than waste time on a mag change in the middle of a string of fire, I would much rather change mags when I’m on the move from one string to another.

As an example, one stage ran like this: in the first door, there was a IPSC target and a popper. The popper fell and activated a swinging target, that was accessible from both the first door and through a window where the second string of fire was. If I shot like a lot of people, I would have shot the IPSC target, shot the popper, then moved to the second window for a shot at the swinger, along with the whole second string.

If I were shooting Limited or Open, where I could have more shots available, then this made sense. But for me, it made more sense to shoot the popper first, then the IPSC target. By that time, the swinger was going, and I could lean left and shoot the swinger from the first door. This gave me 8 shots if I needed them, then change mags and move to the second window.

What I need to work on

I need to work on one-handed shooting, and transition from my right hand to my left hand for one hand shooting. The problem is, practicing one-handed shooting is boring to me. I would much rather practice double taps, or transitions. I am just going to have to suck it up and do it, if I’m going to get better.

I also need to work on shooting small targets at 25 yards.

Both of these are going to take some individual time at an outdoor range, where I’m not entertaining teenagers, or paying for range time by the hour.

But it will be worth it, I know.