Today is Flag Day in the United States, in which we honor the symbol of our country. It is also the anniversary of the founding of the US Army in 1775.

I wanted to share with you a story that involves both.

I fly two flags at my home, most of the time. The largest one I started flying on September 11, 2001, and has flown continually since then, lighted at night. I will always fly this flag.

The other flag is a smaller flag, attached to my mailbox post. It is flown to honor my brother, SFC Michael Lindsay, who has served in the US Army since the fall of 1991. 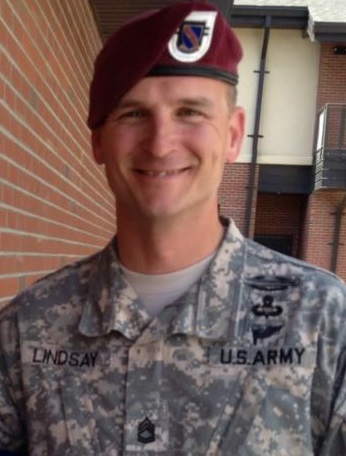 The flag flies on my mailbox whenever he serves in harm’s way in defense of me, you, and our country. As you can imagine, he has had his share of such assignments. In fact, in his almost 22 years of service, I think he has served only about 6 years where he wasn’t in a combat unit – 3 in the Old Guard, performing funerals at Arlington National Cemetery, and 3 as a drill instructor, jump school instructor, and Pathfinder instructor at Fort Benning. So, I have had a flag on my mailbox for most of the last 22 years.

Whenever I need to replace the smaller flag, I keep the old one as long as it isn’t too torn or faded to display. In 22 years I’ve kept 8 or so to display in my yard on national holidays. They are in my yard today, as you can see by the photo at the top of this post.

This is a special Flag Day for me, because I get to retire the mailbox flag, probably for good. My brother returned from his third tour of the middle east recently, and has been reassigned to the training brigade at Fort Dix, NJ, where he will prepare group troops that are deploying. Hence, he won’t be in a unit that could be deployed, barring a zombie apocalypse. His next assignment, we hope, will be to teach ROTC at a college in Florida, which would be an awesome thing for future reserve officers, as much as it would be for him and his family. That will likely be the post from which he retires.

My brother went in the Army in 1991, to get money for college. He scored well enough in the entrance testing to get into the Airborne, and he found out, to the delight of our whole family, that he enjoyed the work. You see, my family has a gene that, if untreated, makes us highly susceptible to being huge assholes. As it turns out, this isn’t such a  bad thing in the army. My brother found out that, in his words, being an asshole saves lives in combat. In fact, he is most proud of the fact that his commanding officers have actually used the word “asshole” in more that one of his annual reviews.

He has mostly spent his time in the 82nd Airborne Division, and he’s been places and done things that we’ve all heard about, like Kosovo, Haiti, Iraq, and Afghanistan. As an example, when Jimmy Carter and Colin Powell were in the office of Haitian President Jean-Bertrand Aristide in 1995, trying to convince him to leave by pointing out that the 82nd Airborne was in the air coming his way, that was my brother they were talking about, flying their way in a big can of whup-ass.

Too, he has done things, and trained for things, that he’s told me about, on the back porch over a beer, that never made the papers. Some of it happened, and some of it was called off. Suffice it to say that, as an American, I am proud of the things our leaders have done, and have been willing to do, for our freedom. I’m also proud of the things they planned but decided not to do. Maybe, one day, these things will make the papers, or someone will write a book.

In any case, one day soon, when my brother’s family finally moves into their new home at Fort Dix, I am going to take a bunch of American flags in a box to the post office, and ship them to him. I don’t have to fly them on the mailbox any more. They are his now. They always were. He’s earned them, and he’s earned my thanks and respect.

One thought on “Retiring A Flag On Flag Day”