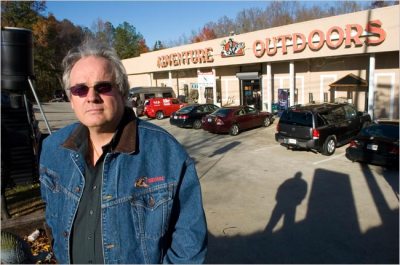 Photo by Erik S. Lesser for The New York Times via freerepublic.com

Where do you buy your guns, ammunition, and shooting accessories? It’s quite a decision to make. If you’re like me, you spend upward of $1,000 a year, maybe more if you decide to add an AR, or start reloading.

How do you decide where to spend that money? Does it matter?

There is a war going on between pro second amendment people and organizations, and those who want to take our guns away. On the side of the anti-gunners are people like billionaire Michael Bloomberg. To say that we can be out-spent is an understatement.

There are a lot of places where I join the fight. I write my local, state, and federal representatives regularly about the issues, and I’m pleased that they are all on our side. I would say I’m fortunate to live where I live, except that this is one reason I choose to live here.

I also participate in action groups like the NRA, GeorgiaCarry, and the Second Amendment Foundation. These organizations take our message to meet larger foes head on.

One area most people may not consider is the gun and ammunition retailer. These businesses are on the front lines, too, and many times they pay the price.

I can do like we do for a lot of things, go for low price. For me that would be Walmart. But Walmart is part of the Mayors Against Illegal Guns, a Michael Bloomberg-funded anti-gun organization. Even their latest decision the start selling guns again doesn’t sway me. Walmart’s decisions are all based on dollars sold per square foot, and if they thought they could make more money converting their guns counters into nail salons, they would do it.

On the other side of the aisle are the locally owned stores. A really good one recently opened near me, Lakeside Guns in Acworth, Georgia. As a member of the National Association of Firearms Retailers, part of the NSSF, they help fight the war. Plus, the service is exceptional, and the people there all seem to love their jobs. When did you last see that at Walmart?

Consider, too, Adventure Outdoors in Smyrna, Georgia. In 2007, Michael Bloomberg decided that large gun stores in other parts of the country were responsible for the guns in New York City, and he sent people to 27 such stores around the country to buy guns using fake identification. He then sued those stores. Most stores settled out of court. Adventure Outdoors did not.

Owner Jay Wallace (that’s him in the photo above) has spent over $1,000,000 of his own money fighting Bloomberg. He is suing Bloomberg over the incident, and it hasn’t kept him from buying a large grocery store across the street, and renovating it, and adding an indoor shooting range, meeting rooms, and a cafe.

I recently needed to replace some Glock magazines. I chose to buy them at Adventure Outdoors so I could help them in their fight. Yes, I spent a little more than I could have if I had bought them on-line. Yes, it meant driving out of my way on the way home one day. But to me it’s money well spent. It’s money well invested.

So the next time you have money to spend, think about the big picture. Use your money to further the cause. If you have to spend a few dollars more, consider it an investment in your shooting future.

3 thoughts on “Putting My Money Where My Mouth Is”