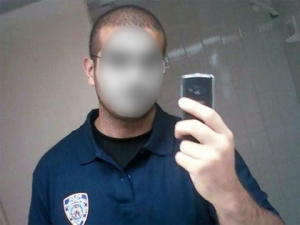 As I have spoken of many times before, one of the most compelling reason for nutjobs to become mass shooter terrorists is to become famous.

So, I am asking, again

You can ask on Twitter; those are 2 quick ways to get me to stop following you.

Yes, they are dead. But this will also serve to embolden their followers and those who also want to be famous.

So, please. Stop making them famous.

On Saturday, October 24, an allegedly drunk woman ran her car into a crowd at the end of the Homecoming parade at Oklahoma State University, killing at least 4 people, and injuring over 30. A nation waited for news, and struggled to understand how someone could do something like this.

The next day, the Traverse City, Michigan, newspaper the Record-Eagle ran this story about the event on page 3. 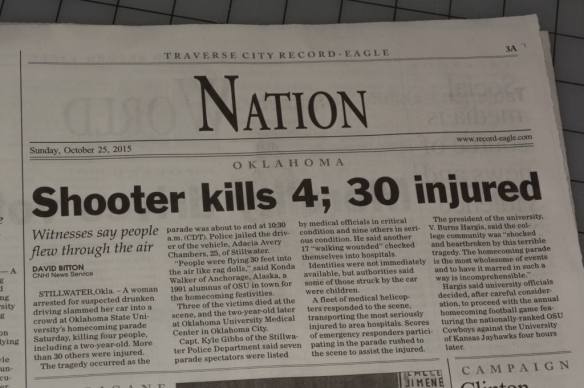 At first glance, one would think the headline writer neglected to read the article.

But then the Record-Eagle upped the derp in its retraction by admitting what we already suspected:

At first I thought they were blaming the printing team. But now I see that this belies their assumption that incidents of multiple deaths or injuries must involve a shooter. Not a driver, or an earthquake, or a flood. And this assumption is so ingrained, they made it their normal page design.

I guess in the race to get the attention of the gun haters, it pays to save time any way you can.

First they came for the blacks, and I spoke up because it was wrong, even though I’m not black.

Then they came for the gays, and I spoke up, even though I’m not gay.

Then they came for the Muslims, and I spoke up, because it was wrong, even though I’m an atheist.

When they came for illegal aliens, I spoke up, even though I’m a legal immigrant.

Then they came for the pornographers, rebels and dissenters and their speech and flag burning, and I spoke up, because rights are not only for the establishment.

Then they came for the gun owners, and you liberal shitbags threw me under the bus, even though I’d done nothing wrong.  So when they come to put you on the train, you can fucking choke and die.

I’m not at that point yet, but I understand why he feels that way.

It seems that the possibility of a UN Arms Trade Treaty, which I first wrote about in June 2011, has returned, and, in the wake of the re-election of President Obama, it has gotten quite a few otherwise intelligent gun owners quite worked up. The word is that this treaty would require anything from the confiscation of all our guns to the cessation of the manufacture of ammunition.

My point today is to reassure gun owners that no blue-hatted soldier is going to show up at your door and take your guns. This treaty, while attractive to the anti-gun factions, is dead as far as the United States is concerned, and, if it were enacted, would not result in any change in our right to keep and bear arms.

Please consider these facts carefully, and use them as defense against anti-gunners who would attempt to scare you with the prospect of some foreign organization finally accomplishing what they could never hope to do.

Now, there are those in the pro-gun camp whose personalities and modes of thinking tend to lead them to see a conspiracy and a hidden agenda in everything. To those I say that this will be my last word on this subject, barring future developments that change the facts. I will tell you that you are wrong, and point you to these facts.

Why? Consider the following:

Thus, only treaties that are executed as outlined in the Constitution are enforceable as law.

The President . . . shall have Power, by and with the Advice and Consent of the Senate, to make Treaties, provided two thirds of the Senators present concur;

So, while the President can execute treaties, the Senate must ratify them, by a two thirds majority. This means that 67 Senators would have to ratify any treaty.

In July 2012 Senator Jerry Moran, R-KS, sent a letter to President Obama and Secretary of State Clinton, expressing opposition to the UN Arms Trade Treaty. It was signed by 51 Senators, although since that time, Senator Scott Brown of Massachusetts has been defeated and will be replaced. However, it is important to note that defeat of this treaty requires only 34 Senators.

Thus, ratification of this treaty is impossible under the current Senate.

But, if the treaty were ratified, would this mean we, as citizens, would be subject to its provisions, to the exclusion of the Second Amendment? No.

As it turns out, the Constitution takes precedent over treaties. In Reid v. Covert, the Supreme Court ruled that the Constitution supersedes international treaties. Specifically it held that “no agreement with a foreign nation can confer power on the Congress, or on any other branch of Government, which is free from the restraints of the Constitution.”

And, given that the Heller case and MacDonald case have upheld that the Second Amendment guarantees individuals the right to keep and bear arms, no treaty can force a change in that legal stance.

Of course, there is the possibility that, if the treaty were enforced, there would be arguments that it now represents the law of the land. Fortunately, we have courts in this country, and our arguments would be swift, and insurmountable.

Having said that, this begs the question of who would mount such a legal challenge. Almost certainly that would fall to the National Rifle Association and the Second Amendment Foundation. These organizations’ political influence and legal prowess have been shown time and again. Say what you will about their fundraising or political goings-on, the anti-gun factions fear them, and for good reason.

And having said that, this begs the question of whether you are a member of the NRA and the Second Amendment Foundation. If not, I urge you to join today.

Now, it is true that the government has, at times, attempted to enforce treaties, or parts of treaties, that were not ratified by the Senate. One example frequently given by those who are currently up in arms is the UN Law of the Sea Treaty. Even though the Senate has never ratified this treaty, many US agencies, such as NOAA,  have adopted provisions of the treaty as part of their operating procedures. This has drawn the ire of may groups, understandably.

However, the limits of territorial waters is not part of the Constitution, so, technically, it isn’t subject to the judgment of Reid v. Covert.

Of course, one reaction I get is that the President would just bypass Congress, sign the treaty, and enforce it by confiscating all the guns.

To that, I have two reactions. First, to those who honestly believe that any President could or would attempt such an obviously seditious and treasonous act, I say, “Really?” You really have a skewed view of the power of the President, much less his political will.

Second, to those who would attempt such a confiscation, I believe I would be joined by millions of other Americans in quoting Leonidas at Thermopylae, “Come and take them.”

For the last few years, I’ve seen these holsters advertised in the discount catalogs – a strong side holster with a built-in magazine pouch. Something has always bothered me about these kinds of holsters, and my wife is tired of hearing me talk about it, so I’ll give it away here.

All that extra gun handling, under stress, seems like a great way to drop the gun.

If anyone has experience with these kinds of holsters, good or bad, please let me know in the comments.